Well that race was a little bit of a disaster for us.

Laurie could not start because of a bad ankle from a smaller crash on the day before, Mike hasn’t had a good run, but also a flat tire and Brook crashed in his race run with in reach of the top split times, got back on the bike and had a flat tire as well.

The only real highlight for us this weekend is the 4thplace of Pat Butler I the juniors race. That got him from 9thto 6thplace in the junior world cup overall ranking.

Riders were struggling in the first training session before qualification. With way less runs as they are used to, they had some try and errors, which is why we saw quite a lot of crashes. Brook went down pretty hard and Laurie rolled his ankle. Almost no able to walk his ankle got taped up by body mechanic Martin New Hill and at least Laurie was able to roll out of the start gate. Laurie got a DNF (did not finish) but as he is a top 10 rider he is protected for the race. Brook finished in 5thwith a massive mistake in the top part. This let us hope for more as he was just 2,2 seconds off on 4.20.00 track. Mike was far off being happy after his run. He said that he made every mistake you could have made on this track and caught all the wrong and slow lines- not happy with his run, but happy with 20thplace.

Junior Patrik Butler finished in 5thwith a solid, but not error free run- we will see if he can make himself a birthday present on race day or not. 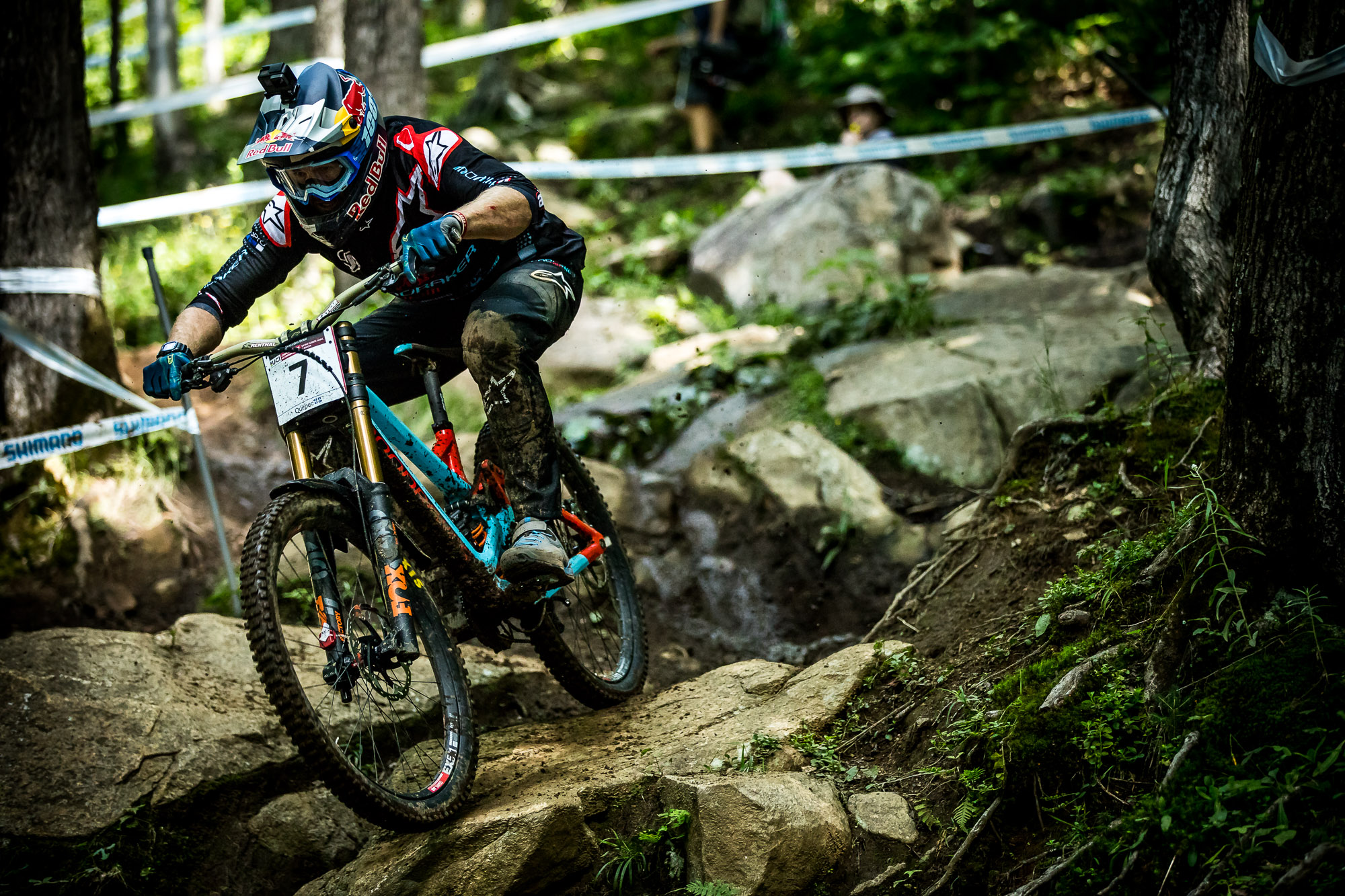 crash marks say it all...

Laurie hurt his ankle in last training session and just rolled out of the start gate.

Mike (by his own words) rode like a beginner, but was happy to qualify in 20th place.

Brook Mac in one of the typical sections of MSA

Pat Butler- turning 18 today- will he make a present to himself today?

Laurie before he rolled his ankle. Look super fast again.

struggling with his ankle...

Mont Sainte Anne/ Canada hosts the 6thround of the 2018 UCI world cup. This year it is the one and only world cup round out of Europe and coming here includes special preparation such as flying over earlier for acclimatize and getting over the jetlag.

The weather in Mont Sainte Anne this year is unusual hot which are the best circumstances for storms and unstable weather. On the first day of training one of those storms kicked in with heavy rain and thunder. Training got interrupted for 2 hours because track marshals got evacuated from the mountain, the gondola got stopped and the riders got a maximum of 4 training runs on the first day. The good thing was that we showed again that we are a force to count with: Brook 3rdand Mike 7th Elite time training and Pat got 2ndin juniors timed training.

Laurie in slippery conditions in the first training.

Mike coming back after a good rest for his wrist

boys going back on track after the first storm.

just 4 training run in total- 4th run in timed training was the first full run and he finished in 3rd.

Laurie back on one of his favourite track even the conditions were really difficult.