Even it looked like Brook might not race because of a bruised hill, he was back in the game for race day, owing to the help of Innsbruck local physio therapist Jon Örarbäck from Loft 41. With some special heel caps and after some days of rest, Brook decided to race at least to represent the team in front of our home crowd.

The training started with a shock as co-factory rider Fabian was carried down by the mountain rescue team because of a ripped front ACL as it turned out after further checkups.

The conditions where difficult, the track and lines changed with every rider going down. Pat race in the under 19 category- he struggled a little bit and crashed in the wood section. His time showed that the pace is there, but after a long break riding because of a broken scaphoid he is still building his confidence on the bike and his constancy. Pat finished in 7thposition.

Brage and Johannes went into the race with early start times and both showed good runs. While the run of Brage was maybe a little bit too conservative, Johannes pointed out with a strong 19thplace in a well casted field with some big names!

For the top riders like Mike, Brook and Laurie, the very late start time, was a bit of an issue. The long break between the last training and the late start after 17:00 made it hard for them to keep the tension they need for their race run. Mike kept building his constancy was able to put a guaranty top ten run together and left with a 7thplace in his pocket. For Brook is was just about to do another race run, the heel didn’t really hold him back, but for sure it was affecting the performance as he was also missing a full day of training- Brook finished in 11thplace. Laurie started into the race as 6thlast. The track changed quite a bit from his last trainings run and he couldn’t put his dream run together and end up in 10thplace.

All riders enjoyed the track a lot and so they will stay for a few more days in Innsbruck to recover and train. 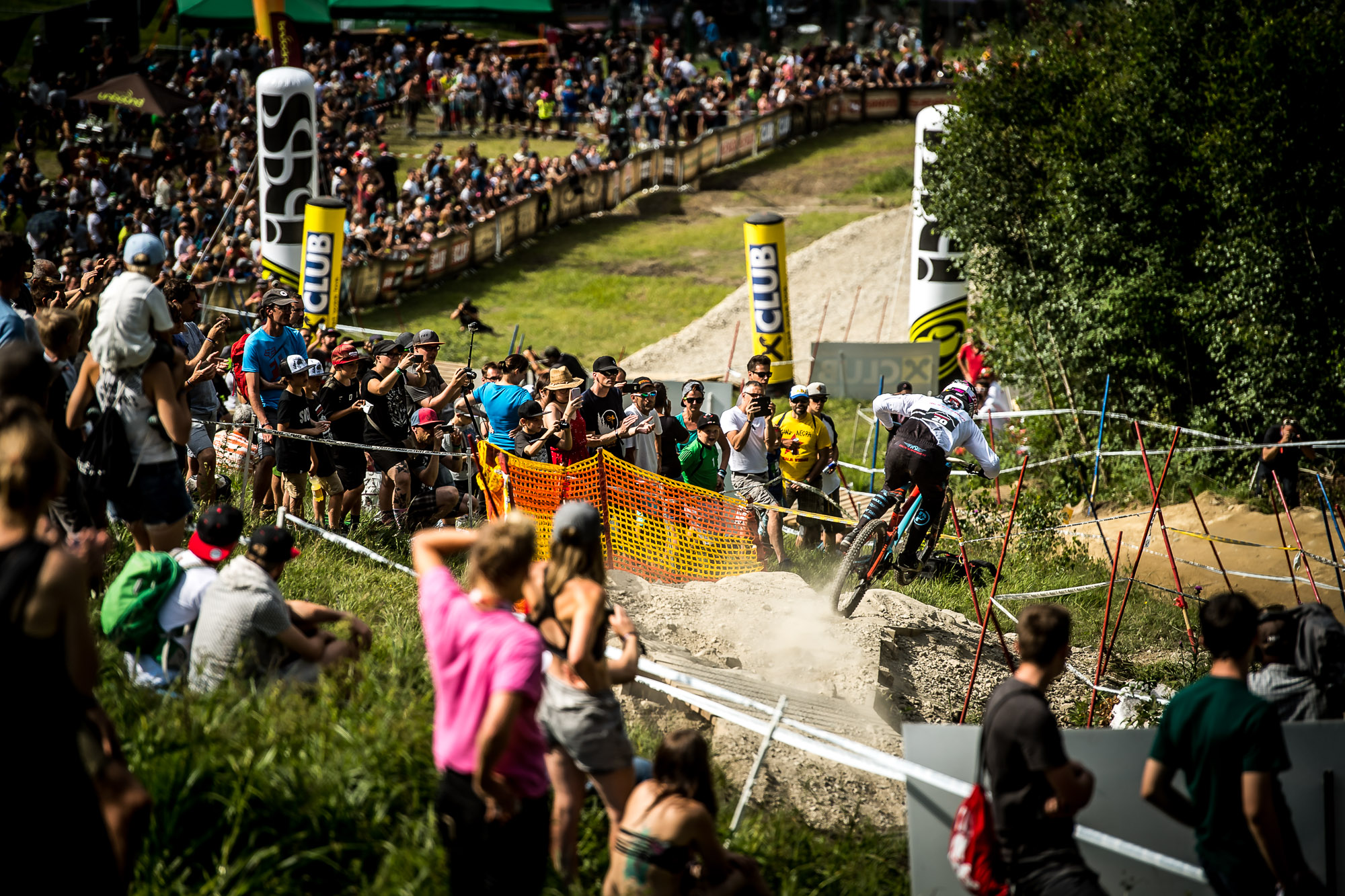 Brook was hold back by a bruised heel, but race for the crowed!

track changes from rider to rider...

Johannes on the very tight line...

Mike loved the track... bummer that this track is closed most of the time!

Mike in front of the main partners of the MS Mondraker team...

One of the highlights of the Crankworx Innsbruck event is the so-called “Whip off” contest. Highlight for sure because of an unique panorama, an perfect shaped jump and an amazing crowd somewhere high up the mountain. The MS Mondraker team was represented by Laurie, Brage and Pat. While Laurie and Brage are known for their whip off skills, Pat was one of the dark horses in the field. In a jam session format Laurie and Pat qualified for the top 10 finals and performed well in an amazing show. They couldn’t win the whip off in the end, but they enjoyed every take off and this is what counts in events like this.

that whip off put a smile into Brages face

Young gun and even younger gun...

Laurie and the fabulous Innsbruck crowd

The Day started with downhill training. The course walk showed that the local track builders did a good job. All the top names of the flied lauded the track as it had a little bit of everything and a good amount of natural features, which the riders really like. Brook had an incident after he tried to jump a gap- he hit his heel, which end up in a heel bruise.

Brook loving it... considering the DH track of Götzens as one of his favourites!

co-factory train with Fabian and Pat

Johannes on one of his Innsbruck home tracks

Mike in one of many root sections...

Mike Jones raved about how good the ground is...

Because of heavy rain we started into the week on Thursday and the first event for us was the pump track race. This is one of those formats, where riders of different disciplines converge. While some of the riders see this as a fun event there are quite a lot of riders, which are focused on this one event. Mike and Brook came into the event with limited training time on a brand new bike and they had a tough lot in their first round. Brook was racing against the BMX professional Niels BENSINK and Mike against pump track specialist and four cross legend Tomas Slavik. Both Brook and Mike tried hard, but dropped out. Last man in the race was Brage Vestavik from Norway. Also Brage faced a difficult log with Joost Wichman, a retired athlete, but famous for his BMX skills. Brage managed to qualify for the evening’s finals. In the first round of the evenings finals Brage faced Adrien Loron and lost both heats.

Summarized the pump track race was a fun event and a good opportunity for us to warm up for the upcoming races!

MS Mondraker boys are in town...

Mike's first pump track attempt after 3 years not being on a hardtail...

...and qualified for finals

Brage with some backlog...

but out after the first final round...